The Alternative to Flat Roofing 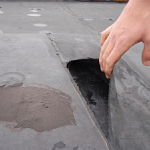 The alternative to flat roofing

The Alternative to Flat Roofing

The alternative to flat roofing is a roof which is inclined at a slope or ‘pitch’ in excess of 10 degrees to the horizontal They are fashioned in single and double pitches as pitched roofs covering small areas, such as porches, garages, verandas, small extensions and the like.

More sophisticated types are used to cover non-domestic roofs. The most common and simplest type of double pitched roof to construct is termed a ‘gable roof. The roof obtains its name from the two triangular areas of brickwork which infill the two roof ends and are known as ‘gable ends.’ The third type of roof form eliminates the gables by fashioning triangular shaped roofing areas at each end of the roof.

The arrangement reduces the amount of walling material required without increasing the materials necessary to form and weather the roof thus producing a saving on overall costs. This formation takes its name from the inclined external angles created by a change of direction of the roof surface which is known as ‘hips.’ The triangular roof shape is a ‘hipped end’ and the roof known as a ‘hipped roof, Other types of roofs are known as Mansards, gambrels and inverted or butterfly roofs. ‘Mansard’ roofs take their name from the French architect designer F. Mansard (1598-1666) who produced a roof having two sets of rafters each side of the roof.

The lower set are pitched steeply while the upper set is arranged to a much lower incline of around 30 degrees. The arrangement permits rooms to be formed within the roof space, thus saving on walling material. Mansards have the upper section of the roof hipped, while ‘gambrel’ roofs, which are similarly shaped, are gabled. ‘Inverted’ roofs are reversed gable roofs having eaves at a high level. This causes the two surfaces to meet at the low level in a valley forming two rectangular inclined wings having a vague resemblance to a moth or butterfly, hence their alternate name. The terms associated with roofing features are as follows.

The upper most meeting area of normally inclined surfaces is termed the ridge – the board which is planted on the rafters ends is known as a ‘fascia board ‘while any unit which boxes in the underside are known as a ‘soffit board.’ Verges which overhang the walling appreciably, are finished with a member known as a ‘barge board’ which may contain a ‘bed-mould’ planted on against the soffit of the roof covering. Inclined internal angles of roof surfaces are termed ‘valleys’; they also occur in horizontal form behind parapet walls An ‘abutment’ occurs where an inclined surface meets a vertical surface, such as where the roof meets a chimney stack or in the case of a ‘lean-to, terminates at a wall surface.